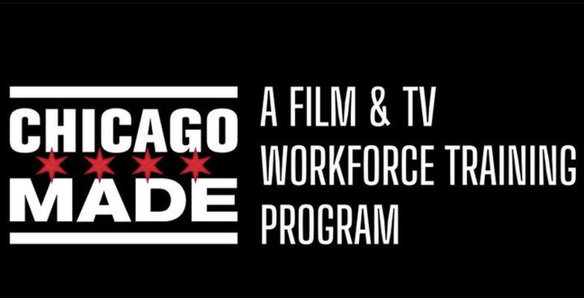 CHICAGO—Mayor Lori E. Lightfoot and the Chicago Film Office at the Department of Cultural Affairs and Special Events (DCASE) today announced a new initiative to strengthen Chicago’s TV and film industry. The new “Chicago Made” workforce development program and public awareness campaign are based on recommendations from the City of Chicago’s COVID-19 Recovery Task Force outlined in the Forward Together advisory report. “This initiative will play an important role in the resurgence of our city’s TV and film industry, which remains one of the largest and most diverse in the country,” said Mayor Lightfoot.

“Chicago’s growing film industry not only ranks our city first in the Midwest for production, it also highlights the diverse culture and immense talent
found throughout our 77 neighborhoods.” The Chicago Film Office at DCASE has partnered with management consulting firm XD-TECH to deliver an innovative workforce development program that aims to transform the region’s TV and film workforce — by offering job training and placement to Chicago residents ages 24 to 50, primarily from underserved areas of our city, to help meet the industry’s increasing demand for skilled workers. Many of the positions are entry-level and do not require a college degree including carpenter, costumer, grip, lighting tech, production assistant and set decorator.

Twenty-five participants will be selected for the first cohort, across 12 career pathways. More than 20 industry partners are providing training or other supports for the program. Chicagoans interested in this opportunity should register for a virtual info session on Friday, December 10 at 6pm CST and can learn more (including eligibility criteria and pre-requisite requirements) at XDTechIndustry.com/ChicagoMade. Applications to participate in this free program are due by December 15.*

*Participants with previous training and/or specific pre-requisite skillsets will be prioritized in order to maximize the effectiveness of the condensed training period.

“Chicago film production is on track to hit an all-time high this year,” said Kwame Amoaku, Director of the Chicago Film Office. “The new ‘Chicago Made’ initiatives will increase our capacity to serve and accelerate the growth of the local industry — building our workforce while supporting residents in every neighborhood.”

Additionally, BTECH Studios and Creative Cypher are working with XD-TECH on program outreach and implementation. Bloomberg Associates, Columbia College Chicago and Kennedy-King College provided consultation support. Additionally, DCASE is launching an ongoing public awareness campaign using the “Chicago Made” brand to highlight the vital role Chicago’s TV and film industry plays in the city — benefiting Chicago residents in all 50 wards (both residents affected by filming in their neighborhood and Chicagoans interested in film production jobs) as well as industry stakeholders. The campaign will showcase the industry’s enormous economic impact, introduce local film workers as neighbors and friends and
highlight the diversity of “reel” jobs available across our city. The campaign’s creative will emphasize the grit and authenticity of Chicago’s film industry and its unique style of filmmaking — via digital billboards, advertising on CTA trains and busses, advertising at O’Hare, social media, community news and more. Learn more at ChicagoMade.us (launching soon; Music and other creative industries to be added in 2022) and join the conversation on social media using #ChicagoMade.

# # #
Chicago Film Office
The Chicago Film Office is part of the Department of Cultural Affairs and Special Events (DCASE) and leads the City’s efforts to attract and enhance the production of feature films, television series, commercials, documentaries and all forms of local screen entertainment. For filmmakers, it is a one-stop liaison for all City of Chicago production needs, including permits, City services and logistical support. For more information, visit chicagofilmoffice.us.
Chicago Department of Cultural Affairs and Special Events The Department of Cultural Affairs and Special Events (DCASE) is dedicated to enriching Chicago’s artistic vitality and cultural vibrancy. This includes fostering the development of Chicago’s non-profit arts sector, independent working artists and for-profit arts businesses; providing a framework to guide the City’s future cultural and economic growth, via the Chicago Cultural Plan; marketing the City’s cultural assets to a worldwide audience; and presenting high-quality, free and affordable cultural programs for residents and visitors. For more information, visit chicago.gov/dcase.