Read biographies of featured guests for "Why Diversity and Inclusion Matters in Tech" webinar to be held Thursday, July 30.

Ilenia Herrera Lutz is an Associate Manager within Accenture’s Talent Acquisition organization. In her current role, Ilenia is the NA Elite I&D Sourcing Lead responsible for inclusion and diversity recruiting for conferences, diversity partnerships and early identification programming with a focus on entry-level candidates. Being passionate about the I&D space, Ilenia enjoys being able to combine her excitement for finding the best talent and her interest in the professional development of underrepresented minorities.

In her 15 years at Accenture, Ilenia has enjoyed a diverse career in the management consulting and human resources field, working with some of the country's most recognizable companies and diversity professional organizations. Paying it forward is a personal passion of Ilenia’s and she dedicates her time off in finding opportunities to open doors for others.

Ilenia resides in the Chicago suburbs and is married to her college sweetheart, Scott and is the proud mother of Ian. In her down time, Ilenia enjoys traveling with her family, catching up on reading, cooking and visiting her family in Panama City, Panama.

Raquel Tamez is CEO of the Society of Hispanic Professional Engineers (SHPE), a national organization focused on empowering the Hispanic community and creating a powerful network of students and professionals via the promotion of careers in STEM. Since 2017, she has expanded SHPE's national programs, services, and resources it offers to its 13,000-plus members nationwide.
Prior to SHPE, Tamez was the chief legal officer, general counsel, and SVP of legal for SourceAmerica, a national nonprofit that creates employment opportunities for people with significant disabilities. Currently, she serves as a board member of the Council of Engineering and Scientific Society Executives and represents SHPE on both the Hispanic Association of Corporate Responsibility Board of Directors and STEM Education Coalition.

In 2019, she was appointed by the National Academies of Sciences, Engineering, and Medicine (NASEM) as a member of the Committee on Women in Science, Engineering, and Medicine (CWSEM); similarly, the Committee on Diversity, Equity, and Inclusion (CDEI) appointed her as a member of the American Society for Engineering Education (ASEE). She earned her bachelor's degree from the University of Texas at Austin and her Juris Doctor degree from St. Mary’s School of Law.

Time is running out to register. Don't miss out! 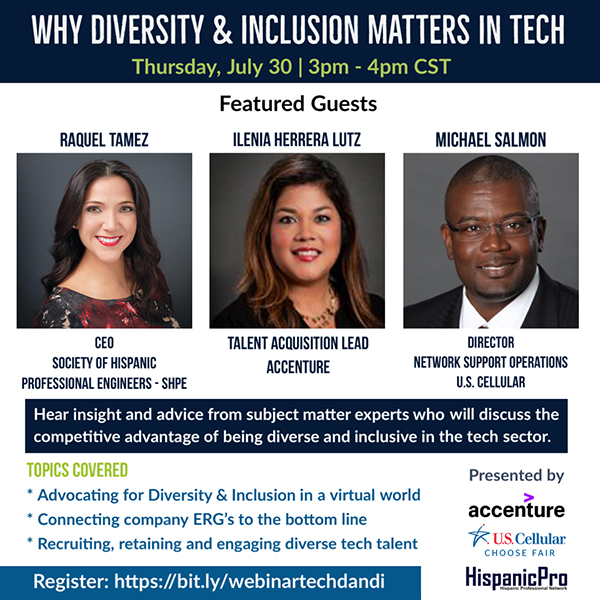